New episodes of the Rasa Masterclass are out now! Watch Now

Warning: This document is for an old version of Rasa. The latest version is 1.10.8.

Choosing an NLU pipeline allows you to customize your model and finetune it on your dataset.

If you have less than 1000 total training examples, and there is a spaCy model for your language, use the pretrained_embeddings_spacy pipeline:

If you have 1000 or more labelled utterances, use the supervised_embeddings pipeline:

The advantage of the pretrained_embeddings_spacy pipeline is that if you have a training example like: “I want to buy apples”, and Rasa is asked to predict the intent for “get pears”, your model already knows that the words “apples” and “pears” are very similar. This is especially useful if you don’t have very much training data.

The advantage of the supervised_embeddings pipeline is that your word vectors will be customised for your domain. For example, in general English, the word “balance” is closely related to “symmetry”, but very different to the word “cash”. In a banking domain, “balance” and “cash” are closely related and you’d like your model to capture that. This pipeline doesn’t use a language-specific model, so it will work with any language that you can tokenize (on whitespace or using a custom tokenizer).

You can read more about this topic here .

You can also use MITIE as a source of word vectors in your pipeline, see MITIE. The MITIE backend performs well for small datasets, but training can take very long if you have more than a couple of hundred examples.

However, we do not recommend that you use it as mitie support is likely to be deprecated in a future release.

Comparing different pipelines for your data¶

Rasa gives you the tools to compare the performance of both of these pipelines on your data directly, see Comparing NLU Pipelines.

Intent classification is independent of entity extraction. So sometimes NLU will get the intent right but entities wrong, or the other way around. You need to provide enough data for both intents and entities.

Classification algorithms often do not perform well if there is a large class imbalance, for example if you have a lot of training data for some intents and very little training data for others. To mitigate this problem, rasa’s supervised_embeddings pipeline uses a balanced batching strategy. This algorithm ensures that all classes are represented in every batch, or at least in as many subsequent batches as possible, still mimicking the fact that some classes are more frequent than others. Balanced batching is used by default. In order to turn it off and use a classic batching strategy include batch_strategy: sequence in your config file.

If you want to split intents into multiple labels, e.g. for predicting multiple intents or for modeling hierarchical intent structure, you can only do this with the supervised embeddings pipeline. To do this, use these flags in Whitespace Tokenizer:

Here is a tutorial on how to use multiple intents in Rasa Core and NLU.

In Rasa NLU, incoming messages are processed by a sequence of components. These components are executed one after another in a so-called processing pipeline. There are components for entity extraction, for intent classification, response selection, pre-processing, and others. If you want to add your own component, for example to run a spell-check or to do sentiment analysis, check out Custom NLU Components.

Each component processes the input and creates an output. The output can be used by any component that comes after this component in the pipeline. There are components which only produce information that is used by other components in the pipeline and there are other components that produce Output attributes which will be returned after the processing has finished. For example, for the sentence "I am looking for Chinese food" the output is:

This is created as a combination of the results of the different components in the pre-configured pipeline pretrained_embeddings_spacy. For example, the entities attribute is created by the CRFEntityExtractor component.

Every component can implement several methods from the Component base class; in a pipeline these different methods will be called in a specific order. Lets assume, we added the following pipeline to our config: "pipeline": ["Component A", "Component B", "Last Component"]. The image shows the call order during the training of this pipeline: 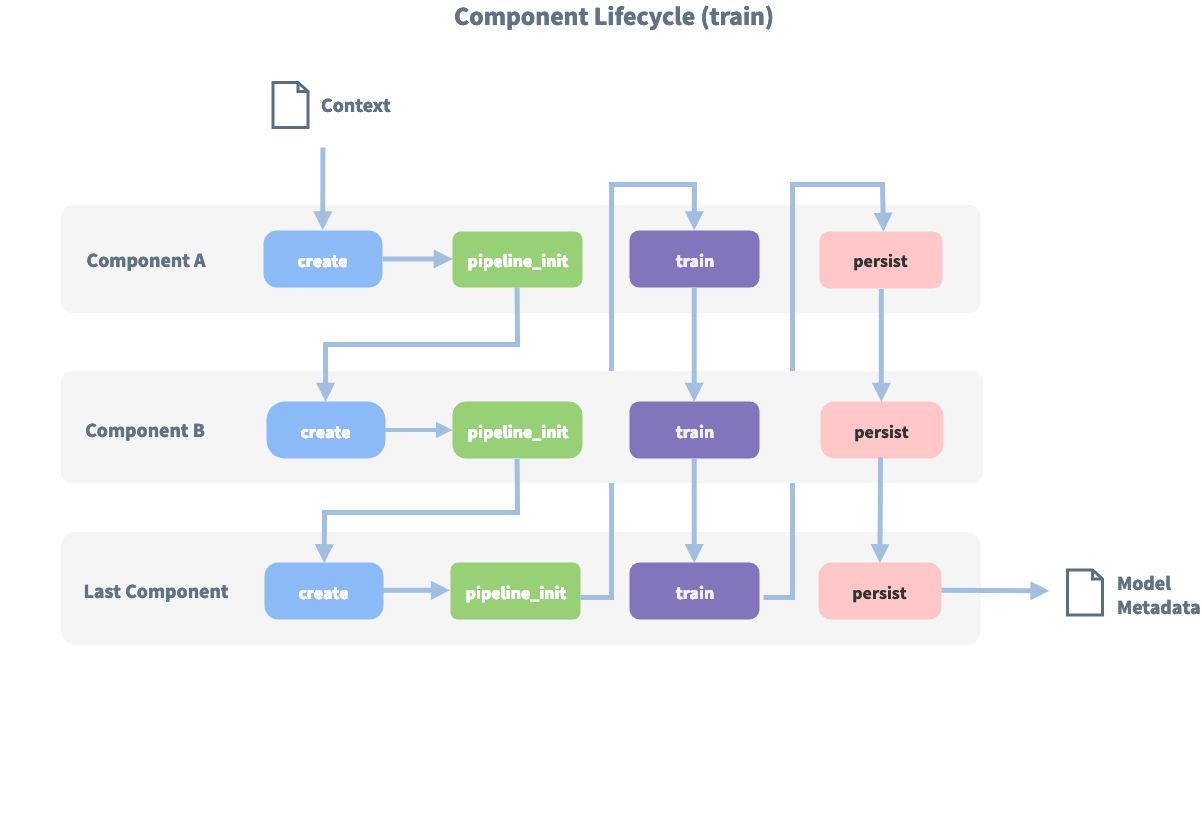 Initially the context is filled with all configuration values, the arrows in the image show the call order and visualize the path of the passed context. After all components are trained and persisted, the final context dictionary is used to persist the model’s metadata.

After parsing, the entity is returned as a dictionary. There are two fields that show information about how the pipeline impacted the entities returned: the extractor field of an entity tells you which entity extractor found this particular entity, and the processors field contains the name of components that altered this specific entity.

The use of synonyms can also cause the value field not match the text exactly. Instead it will return the trained synonym.

A template is just a shortcut for a full list of components. For example, these two configurations are equivalent:

Below is a list of all the pre-configured pipeline templates with customization information.

To train a Rasa model in your preferred language, define the supervised_embeddings pipeline as your pipeline in your config.yml or other configuration file:

So for example, if your chosen language is not whitespace-tokenized (words are not separated by spaces), you can replace the WhitespaceTokenizer with your own tokenizer. We support a number of different tokenizers, or you can create your own.

To use the pretrained_embeddings_spacy template:

See Pre-trained Word Vectors for more information about loading spacy language models. To use the components and configure them separately:

To use the MITIE pipeline, you will have to train word vectors from a corpus. Instructions can be found here. This will give you the file path to pass to the model parameter.

Another version of this pipeline uses MITIE’s featurizer and also its multi-class classifier. Training can be quite slow, so this is not recommended for large datasets.

You don’t have to use a template, you can also run a fully custom pipeline by listing the names of the components you want to use:

This creates a pipeline that only does entity recognition, but no intent classification. So Rasa NLU will not predict any intents. You can find the details of each component in Components.

If you want to use custom components in your pipeline, see Custom NLU Components.

👋 I can help you get started with Rasa and answer your technical questions.