Data validation verifies that no mistakes or major inconsistencies appear in your domain, NLU data, or story data. To validate your data, have your CI run this command:

If you pass a max_history value to one or more policies in your config.yml file, provide the smallest of those values as

If data validation results in errors, training a model can also fail or yield bad performance, so it's always good to run this check before training a model. By including the --fail-on-warnings flag, this step will fail on warnings indicating more minor issues.

Running rasa data validate does not test if your rules are consistent with your stories. However, during training, the RulePolicy checks for conflicts between rules and stories. Any such conflict will abort training.

To read more about the validator and all of the available options, see the documentation for rasa data validate.

Testing your trained model on test stories is the best way to have confidence in how your assistant will act in certain situations. Written in a modified story format, test stories allow you to provide entire conversations and test that, given certain user input, your model will behave in the expected manner. This is especially important as you start introducing more complicated stories from user conversations.

Test stories are like the stories in your training data, but include the user message as well.

Here are some examples:

By default, the command will run tests on stories from any files with names starting with test_. You can also provide a specific test stories file or directory with the --stories argument. You can test your assistant against them by running:

Custom Actions are not executed as part of test stories. If your custom actions append any events to the conversation, this has to be reflected in your test story (e.g. by adding slot_was_set events to your test story).

To test the code of your custom actions, you should write unit tests for them and include these tests in your CI/CD pipeline.

In addition to testing stories, you can also test the natural language understanding (NLU) model separately. Once your assistant is deployed in the real world, it will be processing messages that it hasn't seen in the training data. To simulate this, you should always set aside some part of your data for testing. You can split your NLU data into train and test sets using:

Next, you can see how well your trained NLU model predicts the data from the test set you generated, using:

If you've made significant changes to your NLU training data (e.g. splitting an intent into two intents or adding a lot of training examples), you should run a full NLU evaluation. You'll want to compare the performance of the NLU model without your changes to an NLU model with your changes.

You can do this by running NLU testing in cross-validation mode:

You could also train a model on a training set and testing it on a test set. If you use the train-test set approach, it is best to shuffle and split your data using rasa data split as part of this CI step, as opposed to using a static NLU test set, which can easily become outdated.

You can find the full list of options in the CLI documentation on rasa test.

To further improve your model check out this tutorial on hyperparameter tuning.

To do so, pass multiple configuration files to the rasa test command:

A graph with the mean and standard deviations of f1-scores across all runs is plotted. The f1-score graph, along with all train/test sets, the trained models, classification and error reports, will be saved into a folder called nlu_comparison_results.

If you want to change the number of runs or exclusion percentages, you can:

The report logs precision, recall and f1-score for each intent, as well as providing an overall average. You can save these reports as JSON files using the --report argument.

The confusion matrix shows which intents are mistaken for others. Any samples which have been incorrectly predicted are logged and saved to a file called errors.json for easier debugging. 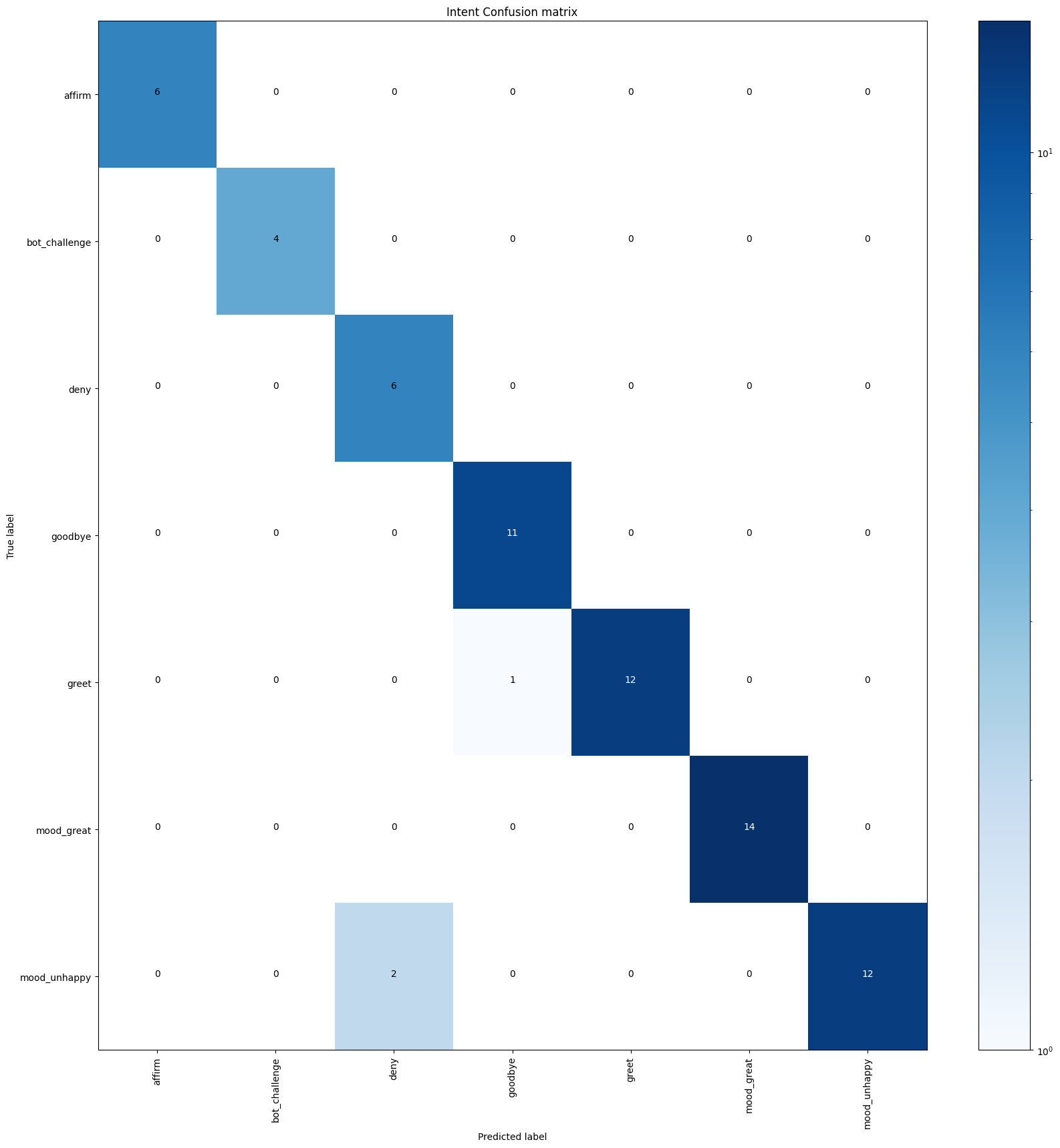 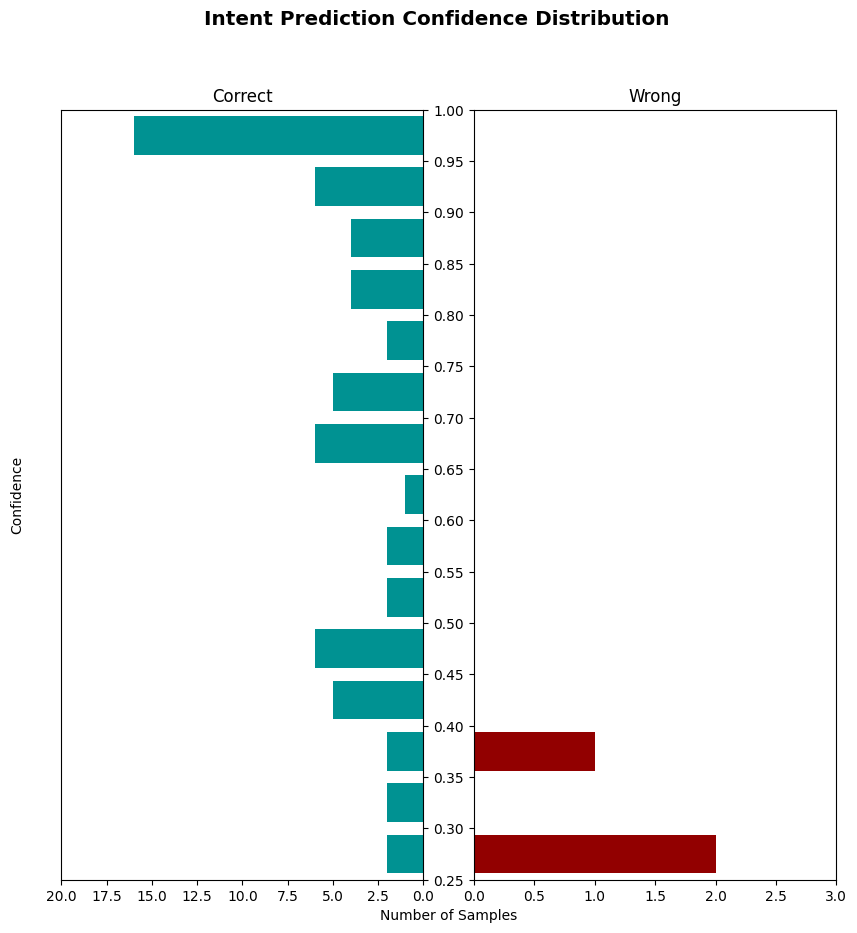 The report logs precision, recall and f1 measure for each sub-intent of a retrieval intent and provides an overall average. You can save these reports as JSON files using the --report argument.

rasa test reports recall, precision, and f1-score for each entity type that your trainable entity extractors are trained to recognize.

Only trainable entity extractors, such as the DIETClassifier and CRFEntityExtractor are evaluated by rasa test. Pretrained extractors like the DucklingHTTPExtractor are not evaluated.

If any of your entities are incorrectly annotated, your evaluation may fail. One common problem is that an entity cannot stop or start inside a token. For example, if you have an example for a name entity like [Brian](name)'s house, this is only valid if your tokenizer splits Brian's into multiple tokens.

To evaluate entity extraction we apply a simple tag-based approach. We don't consider BILOU tags exactly, but only the entity type tags on a per token basis. For location entity like “near Alexanderplatz” we expect the labels LOC LOC instead of the BILOU-based B-LOC L-LOC.

The BILOU-based approach, however, would label this as a complete failure since it expects Alexanderplatz to be labeled as a last token in an entity (L-LOC) instead of a single token entity (U-LOC). Note also that a split extraction of “near” and “Alexanderplatz” would get full scores on our approach and zero on the BILOU-based one.

Here's a comparison between the two scoring mechanisms for the phrase “near Alexanderplatz tonight”:

You can evaluate your trained dialogue model on a set of test stories by using the test script:

This will print any failed stories to results/failed_test_stories.yml. A story fails if at least one of the actions was predicted incorrectly.

Warnings for stories were added.

The stories are sorted by the severity of action_unlikely_intent's prediction. This severity is calculated by UnexpecTEDIntentPolicy itself at prediction time. The higher the severity, the more unlikely is the intent and hence reviewing that particular conversation path becomes more critical.

Note, that action_unlikely_intent is predicted by UnexpecTEDIntentPolicy which employs a machine learning based model under the hood and hence can result in false warnings as well. You can choose to ignore such warnings if the conversation paths in these stories are already present in the training stories.

To choose a configuration for your dialogue model, or to choose hyperparameters for a specific policy, you want to measure how well your dialogue model will generalize to conversations it hasn't seen before. Especially in the beginning of a project, when you don't have a lot of real conversations to train your bot on, you may not want to exclude some to use as a test set.

Rasa Open Source has some scripts to help you choose and fine-tune your policy configuration. Once you are happy with it, you can then train your final configuration on your full data set.

To do this, you first have to train models for your different configurations. Create two (or more) config files including the policies you want to compare, and then provide them to the train script to train your models:

Similar to how the NLU model was evaluated, the above command trains the dialogue model on multiple configurations and different amounts of training data. For each config file provided, Rasa Open Source will train dialogue models with 0, 5, 25, 50, 70 and 95% of your training stories excluded from the training data. This is repeated three times to ensure consistent results.

Once this script has finished, you can pass multiple models to the test script to compare the models you just trained:

This will evaluate each model on the stories in stories_folder (can be either training or test set) and plot some graphs to show you which policy performs best. Since the previous train command excluded some amount of training data to train each model, the above test command can measure how well your model predicts the held-out stories. To compare single policies, create config files containing only one policy each.

This training process can take a long time, so we'd suggest letting it run somewhere in the background where it can't be interrupted.

The approach used to test your action code will depend on how it is implemented. For example, if you connect to external APIs, you should write integration tests to ensure that those APIs respond as expected to common inputs. However you test your action code, you should include these tests in your CI pipeline so that they run each time you make changes.

If you have any questions or problems, please share them with us in the dedicated testing section on our forum!